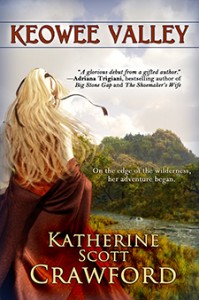 Spring, 1768. The Southern frontier is a treacherous wilderness inhabited by the powerful Cherokee people. In Charlestown, 25 year-old Quincy MacFadden receives news from beyond the grave: her cousin, a man she’d believed long dead, is alive—held captive by the Shawnee Indians. Unmarried, bookish, and plagued by visions of the future, Quinn is a woman out of place… and this is the opportunity for which she’s been longing.

Determined to save two lives, her cousin’s and her own, Quinn travels the rugged Cherokee Path into the South Carolina Blue Ridge. Defying her furious grandfather and colonial law, she barters for leverage against the Shawnee with a notorious Cherokee chief—and begins building a daring new home in the Keowee River Valley, a fiercely beautiful place.

But in order to rescue her cousin, Quinn must trust an enigmatic half-Cherokee tracker whose loyalties may lie elsewhere. As translator to the British army, Jack Wolf walks a perilous line between a King he hates and a homeland he loves.

Together they journey across the Appalachian Mountains and into the heart of Cherokee country. They encounter wily trappers, warring Indians, British soldiers, desperate settlers, and a contested backcountry on the brink of changing forever.

When Jack is ordered to negotiate for Indian loyalty in the Revolution to come, the pair must decide: obey the Crown, or commit treason…. 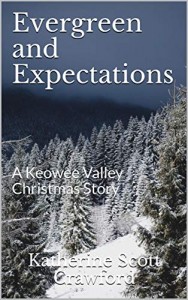 It is Christmas in the Keowee Valley. More than a year since Quincy MacFadden Wolf and her half-Cherokee husband, Jack, returned from adventures abroad, it should be a season of celebration and good cheer. Quite unlike herself, Quinn is surly and sad, longing for the good company of friends and family. But the Twelve Days of Christmas will bring surprising revelations and unexpected guests, and Quinn will discover she is capable of great purpose–and that she is more at home on the frontier than ever before.

Katherine Scott Crawford returns with a short story filled with characters from her awarding-winning historical novel. Set on the wild Carolina frontier in the years before the American Revolution, the Keowee Valley is still beautiful and mysterious, and Quinn and Jack a pair of lovers as rare and real as they ever were.

Available in ebook format at Amazon.