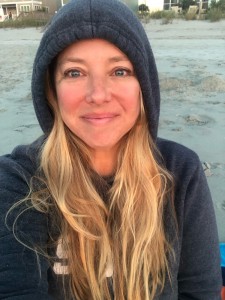 Sunrise on the beach (and so very happy)

Katherine Scott Crawford is the award-winning author of Keowee Valley, an historical adventure set in the Revolutionary-era Carolinas and the Cherokee country. A recovering academic and former adjunct professor, her creative and critical work has appeared in magazines and literary journals including South Loop Review, Appalachian Review, the Santa Fe Writer’s Project, Wilderness House Literary Review, and more. A popular newspaper columnist, her column on parenting/outdoor life was published weekly in U.S.A. Today newspapers across the United States and abroad.

Katherine has served as a guest lecturer, panelist, and workshop leader at the Southern Women Writers Conference, the Carolina Mountains Literary Festival, Tinderbox Writers Retreat, the Academic Writing Retreat at Earthshine Lodge, Blue Ridge Bookfest, and many libraries, book clubs, and women’s groups. Winner of a North Carolina Arts Award by the NC Arts Council, she has been awarded fellowships to the Vermont Studio Center, the Montana Artist Refuge, the Key West Literary Seminar, and others. She is Founder & Director of MountainTop Writers Retreats, seasonal retreats hosted at a remote mountain lodge, crafted for writers and creatives of any ilk at any stage of their career journeys. She holds a MFA in Writing from the Vermont College of Fine Arts. A former backpacking guide and travel junkie whose passport constantly calls her name, she lives in the mountains of Western North Carolina with her husband, daughters, and their trail dog. When everyone is really quiet, she works on her next historical novel.

Katherine Scott Crawford was born and raised in the blue hills of the South Carolina upcountry by a raucous clan of Scottish and Czech-American Southerners. After finishing Clemson University, and to the utter dismay of her parents—who had paid for her very fine undergraduate degrees—Ms. Crawford joined a ragtag, couch-surfing group of nature lovers and became an outdoor educator. (It was her family’s fault: they’re the ones who taught her to swim, hike, paddle, and become generally obsessed with the great outdoors.) She swam, hiked, climbed, paddled, and played with kids in the Southern Appalachian backcountry until taking a full-time job as a reporter for a local newspaper. Her weeks were spent gallivanting around three mountain counties in her old Isuzu Trooper, interviewing locals, local big wigs and even some famous folks, and having the time of her life despite long hours, a sometimes icy commute, and marathon school board meetings.

Deciding that it was teaching and writing she wanted to do most, Crawford returned to school for a Master’s degree in English from a joint program between the College of Charleston and The Citadel. Really, she just wanted to live in Charleston. After two years on a sea island in a tiny beach cottage with cracks in the floor and no insulation, a summer studying in Italy, completing two massive theses comparing Shakespeare to Petrarch, and the adoption of one of the great loves of her life—a Labrador puppy named Scout—she headed back to the Upcountry to marry one of the other great loves of her life.

Back in the mountains where they’d met, Crawford and her husband took up house and she began teaching as an adjunct English instructor at nearby four-year and community colleges, trying to convince word-wary eighteen and nineteen year-olds that words and Faulkner are fun. Attempting the tightrope act of teacher-writer, she published essays in magazines and literary journals like Columbia College Chicago’s South Loop Review, the Santa Fe Writer’s Project, and Wilderness House Literary Review. She’d been writing (but not finishing) novels since high school, but her “ah ha” moment came after a meeting with a reputable editor at the South Carolina Writer’s Workshop. He read the first 15 pages of her novel, looked at her straight-on and said frankly, “In a year or so, when you finish this, you need to start shopping for literary agents. You’ve got a very publishable work here.” And thus began a year and a half of research and writing, and generally mumbling incoherently to her husband whenever he asked her anything.

Crawford had a couple of wonderful writing years: she was awarded a North Carolina Arts Award in fiction by the N.C. Arts Council, and won full fellowships to the Montana Artists Refuge (where she was an October Writer-in-Residence) and the Vermont Studio Center. An essay she’d written while in Montana, “Deep Breathing Under Big Sky,” earned a literary award in the Santa Fe Writer’s Project Literary Awards Program, judged by Pulitzer Prize-winning author Robert Olen Butler. Her novel, then entitled Keowee, made it to the Quarter-Finalist Round of the 2011 Amazon Breakthrough Novel Contest.

She currently lives in Brevard, North Carolina with her husband, her young daughters, and a new dog. She has taught a variety of English courses–composition, environmental literature, Cherokee history, and more–at Brevard College. For five years, she wrote a weekly parenting and outdoor life column for The Greenville News in South Carolina (which also happens to be the place that gave her her first paid writing job, right out of college). Her columns appeared in newspapers across the country and abroad (see The Short Version, above). She is the Founder and Director of MountainTop Writers Retreats, hosted at beautiful Earthshine Lodge in Lake Toxaway, North Carolina. In her spare time (snort), she’s working on her second historical novel

In an attempt to be a fully functioning writer-teacher-wife-mother-daughter-sister-friend-healthy-kind-human-being, she channels Wonder Woman, Katharine Hepburn, Abigail Adams, and her grandmothers.

Crawford’s debut novel, Keowee Valley, is an historical adventure set in the Revolutionary-era Carolinas and in the Cherokee country. Several generous authors, including Pat Conroy, Adriana Trigiani, Ron Rash, Tommy Hays, and others, had some very nice things to say about it. Available anywhere books are sold.