* Also posted over at my blog, The Writing Scott.

Crock-Pot, how do I love thee?

On this election day, my mother, my daughter and I are making chili.

Okay, so my mom really made it. But we’re all going to eat it!

It smells and looks absolutely delicious. We adapted the recipe from Southern Living magazine. Here it is:

Our adjustments: Sometimes we use meat crumbles, sometimes ground turkey. Mom always adds a can of Rotel. We eat ours with good ol’ Jiffy cornbread!

Our plans for tonight include eating this fabulous chili, then heading to my family’s church for a special election night communion. Then, Mom and I will surely stayed glued to the T.V. to see what’s in store for the next four years. 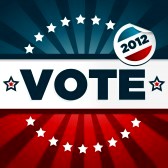 * * Just for fun–and because I have a quote obsession–here are 5 quotes for Election Day 2012:

“The politicians were talking themselves red, white and blue in the face.”
~ Clare Boothe Luce

“My experience in government is that when things are non-controversial and beautifully coordinated, there is not much going on.”
~ John F. Kennedy

“Our political institutions work remarkably well. They are designed to clang against each other. The noise is democracy at work.”
~ Michael Novak

Happy Election Day to all!