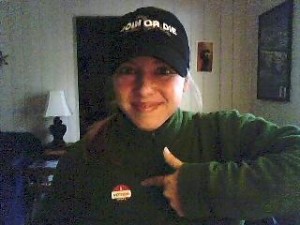 As you can see from the picture above, I voted today!

That’s me pointing out my fuzzy “I Voted Today” sticker. I’m wearing my “Join or Die” hat, which I purchased after falling in love with the HBO miniseries John Adams (based on the biography by David McCullough). “Join or Die” was a phrase attributed to Benjamin Franklin in a 1754 political cartoon, in which he entreated the colonies to unify.

In 1754, he was urging folks to unite against the French and Indians, who were then major enemies of the British colonies. About, oh, 1765, it was used in the American Revolutionary War, to encourage the colonies to unite together, to free themselves (eventually) from England.

I realize that wearing a hat representing a 1700s political cartoon makes me, officially, a history dork. (I can see my husband smirking from afar as he reads this. He’s probably saying, “That ship has sailed.”) However, I figure “Join or Die” is a darn good slogan to wear during election season.

Voting is one of my favorite things in the world to do. I get giddy when I vote. I take extra “I Voted” stickers from the basket beside the door on the way out of the voting booth, so I can transfer them to different shirts.

I turned 18 years old in a presidential election year. It was thrilling! I remember every moment: driving with my mother to the nearby Baptist church where people from my district voted, waiting in line with my voter registration card and my license. Watching and listening as the cranky little old lady examining my card told me there was no way I could be 18, because I looked like I was in middle school.

But nothing could dampen my spirits. I’d voted! I was part of the process! I was taking part in something wonderful, something rare, and something vital–something warred over, struggled over, and died over. For me. That November sun was bright as a promise as Mom and I walked out into the church parking lot. And I’ve voted in every election since.

I could write an entire post about the history of voting rights, wax ironic about the fact that my ilk couldn’t vote until 1920, or hop up on my “forget partisan politics, and vote with your brains and hearts” soapbox. But I won’t.

I’m simply too giddy. I’m an American citizen, and I got to vote today.

And that means everything.