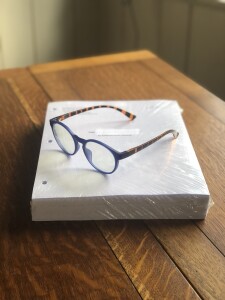 Just before the new year, two things happened for me.

1.) After my first visit to the optometrist in seven years, I got glasses.

My vision used to be perfect–I was the girl who read the street signs or saw the eagle in the trees before anyone else. I now possess bifocals … or “progressive lenses,” as I’m told they’re called this days (she says, tapping her cane).

My prescription isn’t strong, and it’s mostly glass on the bottom (I need them for distance). I asked the doc, “How often do I have to wear them?”, and he chuckled and said, “You really should wear them all the time.”

I’m being nice: it was more of a snort.

2.) I set a goal to complete my second novel before Christmas, and I’m happy to announce–I did it!

The manuscript has been revised to the best of my abilities, and read by my faithful alpha and beta readers. For non-writers, these are folks who the author trusts, and who can, on a variety of levels, let her know if the story’s working. Mine always include a small cadre of family members and friends. This time the cadre included two friends who are also award-winning, published authors, and whose insights were invaluable.

I set the specific goal because in November, my literary agent of 14 years retired. I knew I had to go in a different direction than with the agent to whom he handed over his clients.

What does this mean? Well, I’m beginning to query literary agents for the first time since 2007. To do this, I had to craft a query: A one-page letter which hooks an agent on my novel, gives them the gist of what it’s about, explains whose books it’s like and why it’ll sell, and also offer my bio. (Point of reference: the last time I queried I was in my 20s, newly married, and did not have children. Since then I’ve had two children, been a college professor with a newspaper column, earned a MFA, run writers’ retreats, done a bevy of other academic and writerly jobs, and remodeled a house.) A query is like speed dating. With better grammar.

Mine is a historical novel with a dual timeline and a dual narrative: It’s told from the point of view of one character in the present (first person), and one two hundred years in the past (third person close). It’s also a timeslip adventure with romantic elements, the style straddling the line between the fast pace of commercial and the crafted detail of literary fiction.

All this is to say, it’s a beast to query. (And to synopsize–a requirement of many agents.)

So, if y’all would, please send up a wish that I find a literary agent who not only loves the manuscript and believes it deserves a place in the world, but who wants to work with a huge history dork/recovering academic/outdoor junkie/wandering spirit/hyper-focused/has hard time sitting still/would rather be outside/non-makeup wearing/eccentric (and this is kind)/brain full of a thousand stories, writer … on an esoteric and (hopefully) prolific and lifelong career.

* P.S. The photo is of my printed manuscript, which was a Christmas gift to my husband (at his request). The glasses are Zennis.