Friday lines: Scene from my novel-in-progress; or, “Woman from the future” 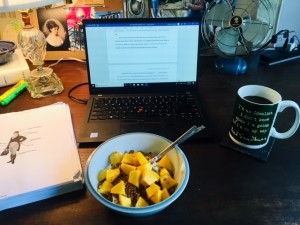 Happy Friday! Hope y’all enjoy this scene from the first (and very rough) draft of my historical novel-in-progress. For more about the story, and other scenes, go to my Work in Progress page.

* Woman from the future *

Startled, the woman looked at him. She rubbed her hands along her knees, and fingered a spot where the thin material had caught on something, the rip there exposing her skin. With a sudden, piercing clarity, Daniel wanted nothing more than to run his own finger along that line of white skin. He cleared this throat.

“I am Daniel Petigru. It is our pleasure, my sister Honor’s and mine, to offer you respite and aid you on your way.” How stilted he sounded, but then, he was nervous. And how strange she use her own name, and not her husband’s. Clearly she was married, or had been: there was a white line on her finger, indicating a ring had sat there, once. And she was of an age … or perhaps she was a widow.

“From wherever did you come?” Honor asked, abandoning all pretense of propriety. There was no answer.

“Madam Vance,” Daniel said. But at the woman’s blue-eyed glance, containing—it seemed to him—both fear and challenge, he hesitated. “Or is it Miss?” Good God, man, he thought. Why not come right out with it and ask if she is married?

“It’s madam … or was,” she said. “But I prefer Gamble.” She straightened in her chair, cupping her knees. She gripped at the joints, white showing at her knuckles. “Please tell me, what year is it?”

“That’s what I figured, but I needed to hear it.” She cleared her throat, and Daniel watched the movement at her slender neck, wondering what she would say next. He could not hazard a guess.

“I was born in Asheville, which is a town in the mountains of North Carolina. Which doesn’t exist yet,” she said. “But I come from Charleston. From the year 2004.”

Daniel Matthew Petigru considered himself to be a bit of a revolutionary. He was born in 1765, in a revolutionary decade. He was an artist, after all—had toured and painted all over Europe, apprenticed under the masters, lived in Rome and Paris until the revolution there had become too bloody even for the artists. He’d only returned home to Charleston to care for his sister after the deaths of their parents.

In Charleston, he had made a home with Honor, their living from family money—their father had been a successful rice broker—and made from his own art. He knew himself to be a driven man, often [check idiom] losing sight of everything and anyone around him. Before he’d left Europe, he had been entirely concerned with portraiture in miniature—an ancient practice, its origins in the Middle Ages, though a mode of artistry people still considered most unusual. Thankfully, miniatures were all the rage in Charleston. He painted them for whomever commissioned him, and had painted over fifty in 1804 alone. Honor said he was obsessed.

Still, despite his unusual trade and knowledge of the world, Daniel could not conceive of Gamble’s origins. It wasn’t that he did not believe her. Anyone who met the lady was sure to be convinced by her strength of character, her keen and obvious intelligence. But to travel through time? From 200 years in the future? It was a most incredible proposition.

“I believe her,” Honor announced, and Gamble smiled, tension leaving her elvish face. For Daniel was certain he’d seen, somewhere in a book in Copenhagen, the face of a yellow -haired elf who looked exactly like her.

Daniel stood. “Yours is a tale we most certainly want to hear,” he said. “But I believe Gamble”—he hesitated briefly over the use of her given name, yet charged on—“is in need of a rest in a room of her own, and perhaps the loan of a gown?”

“Yes, quite,” Gamble said. Then the woman stood and rolled her head on her neck, just as a boxer does before he enters the ring. It made Daniel smile. She was captivating.

They stood there, smiling at each other, until Honor said, “Yes, well, do come with me, madam. We are not of a height, but our mother was about your size. One of her frocks should do.”