Hi! It’s been a while, folks. Writing in the summertime when your kids are at home is a bit like running the gauntlet. (Yes, gauntlets have been around since people were basic brutes and rarely end well for the runner. No, I’m not exaggerating.) That being said, here’s a scene from the *first* draft of my historical novel-in-progress. For more scenes, and a brief overview of the story, go to my Work-in-Progress page. 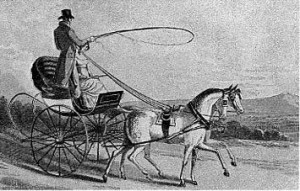 Daniel stared at Gamble across the enclosed carriage. Beside him, Honor did the same. It was rude, he knew, but he just couldn’t help himself and, perhaps, neither could Honor. Gamble was most assuredly not of this time. At the Drayton’s ball, she was sure to attract notice first for being new, then for being beautiful, and last for being odd. When Ben helped her into the carriage moments before, she’d taken his gloved hand, stopped on the hitching step [check], and then bounced up and down on the balls of her feet—on purpose—as if it was a joggling board, and she a child. [check]

“The past is a kick,” she’d declared, on a loud and joy-filled laugh.

Truly, the woman was a grenadier. Who knew what bomb she would throw next, and into a crowd?

Her appearance was an illusion, for she was the picture of innocence, with her wild yellow hair (which she refused to let Honor or Effie curl into anything a la mode) her flushed pink cheeks and giant blue eyes. From the appearance of her gown when she and Honor had met him at the carriage, she must have at least allowed for stays. But she knew more about the world, their world, than they did of hers—certainly knew what would happen, years in the future. If it had been left up to Daniel, he’d have kept them all at home for the evening and plied Gamble with food, drink, and questions.

At first, Daniel wasn’t sure he could answer. When Honor and Gamble had exited the house, Effie trailing behind with their cloaks, he had been caught off his guard. The dress Gamble wore was his mother’s to be sure, which meant that it was at least a decade old and certainly out of current mode. But that did not matter, for it was stunning on her.

He remembered his mother in it, or at least could remember her coming down the stair in it. More, Daniel remembered his father’s reaction. His mother had been petite, as was Gamble, with hair not as wild as the woman’s from the future, but a similar kinship blonde. Because the dress was a bright teal, bordered with decorative gold-stitched accents on the sleeves, high waist, and hem—the rich color one unique to ladies’ ball gowns as he knew them—it brought out the flush in his mother’s cheeks, the gilt in her hair. He could tell, even before his father told her she was beautiful, his mother had felt it for herself.

When Gamble emerged from the house, framed by the painted black door and the tawny color of the stucco behind—a scene almost Italian in its sumptuousness and hue—Daniel knew, suddenly, what it meant to have his heart skip a beat.

Gamble wore a velvet Spencer jacket of deep blue, one loaned from Honor. It was new, the loan of it evidence of Honor’s swift and growing affection for the woman. A woman who had only been with them one day. A woman who was certain to leave them, should she have the chance to return to her own time.

Daniel met Gamble’s eyes. “Yes, she does,” he said.

Ben called out a greeting to a passing curricle and that driver called back. Gamble leaned forward, pushing back the curtain at the window, letting the cold in. She poked her head outside. The lamps were already lit all the way down Tradd Street. When the carriage turned south [check] onto Broad she clung to the door during the turn to steady herself.

“Whatever is she doing?” Honor whispered to Daniel, louder than he would have liked.

“I’m looking at the world,” Gamble said, overhearing and not bothering to hide it. “It’s incredible.” She sat back onto the bench with a broad grin.

Daniel and Honor looked at each other in confusion. “Hear what?” Daniel said.

“The clatter of horses’ hooves on the cobblestones. The hiss of the gas lamps. The rush and crackle of the wind in the palmettos.” Gamble shook her head as if in disbelief, then held out her hands, palms up, like a woman begging for something in response.

“There’s no background noise!” she said, voice rising with excitement. “No noise of the busy world, polluting everything. No music blaring. No cars. I bet tonight, if we were to walk to the harbor, there’d be a million stars in the sky. I bet if we climbed the steeple at St. Michael’s, we’d be able to see for miles. But the quiet, oh—it’s the loveliest thing I’ve never heard in my life.”

“What is a car?” Honor asked, before Daniel could.