Hi, all! Here’s a quick new excerpt from my historical novel-in-progress. For more information, go to my Work-in-Progress page.

This scene is set in Charleston, South Carolina, 2004. Enjoy! 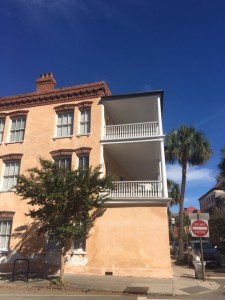 * The Cheshire Cat and Alice *

When all else fails, go see your best friend. This is an attitude I’d adopted in graduate school (the third time), when I was finally there for the right reasons, and had also begun to see Harry on a regular social basis.  Whenever I found myself overwhelmed by Harry’s Charleston-ness, and by my anxiety over fitting into his family and by what—if I’m brutally honest—had begun to gnaw at the edges of my intellect: the notion that we weren’t entirely right for each other, I’d pop over to the College of Charleston and bother my best friend, Tolliver Jackson.

Tol was, at the time, a new assistant professor in the College’s Department of African-American Studies. We’d met at a graduate school social my first week in Charleston, at the house of the Graduate Dean and Provost—a lovely ranch with a wide yard, in an up and coming neighborhood in West Ashley. There had been a game of beer pong in the carport (what can we say? We were grad students) and I’d been running the table all night. What my fellow grad students didn’t know was that, not unlike Dr. Johnny Fever from the 1980s TV show WKRP in Cincinnati, the more inebriated I get, the more coordinated I become.

You remember the episode, don’t you? Dr. Johnny Fever and Venus Flytrap are involved in some midnight, on-air contest involving shots and hitting a buzzer to answer trivia questions. Johnny Fever, a laconic leftover from the ’60s, gets quicker and more accurate the more drinks he consumes. Venus Flytrap, on the other hand, gets tanked.

Anyway, it’s classic 1980s television. Worth wasting an hour on.

But back to Tolliver and me, and how we met. Tol challenged my beer pong supremacy with a bet that he could land the ping pong ball in a full Solo cup of beer perched on my head. A la William Penn and the apple.

I took the bet and Tol hit the shot, and half an hour later we were swinging in the Dean’s Pawley’s Island hammock in the backyard, barefoot and counting stars through the breaks in the canopy of waxy crepe myrtle and oak overhead. Tol was a startling six-foot-five inches tall, five years older than me, and had been born and raised on a Georgia sea island. His skin was such a deep mahogany, all that showed when he smiled in the dark while we were swinging was his wide, white, perfect smile.

“You look like the Cheshire Cat,” I’d told him.

He’d given the ground a push with his long-boned foot, which was hanging from our hammock, and up we swung, the ropes creaking from the effort.

“Then that makes you Alice,” he’d said.