Today I hit 80,000 words on the first draft of my novel manuscript.

To celebrate, here’s another excerpt from the first draft of my historical novel-in-progress. It’s a time-jump, parallel-time novel, and so this is told from the 2004 pages (the others are set in 1804), and it’s from my “modern” protagonist, Gamble’s, point of view. She’s an art historian and art restoration expert at the Gibbes Museum in Charleston, South Carolina, and she’s working on unraveling a ghost story: on finding out more about a girl she’s seen in an alley–a girl who may not be of this world.

You should know: Gamble is divorced, and she has a black Lab named Kipling. Fun fact: the scene below, when her gentleman neighbor asks after the dog, is straight out of my life.

I hope y’all enjoy it! For more information, see my Work-in-Progress page. 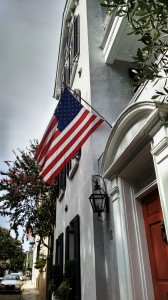 I wanted nothing more than to dive into the girl’s life. By this, I mean into her history: to find out who she really was, and perhaps to discover why she was talking to me. I’d have to do it with subtlety. Because what reputable historian walks up to any sort of archivist and says, “Hi, I’ve come to research this ghost/time traveler/crazy person who’s been talking to me from the past”?

On second thought, I don’t know. Archivists are mysterious creatures. Maybe one would believe me.

Still, witch hunts may have shifted a bit from the 1600s—no more burnings at the stake, deaths by pressing, drowning or hanging—but they still exist. In the art world, they hang your credibility. Ghost you from the best jobs and fellowships. This is what could happen to me should I reveal I was funneling my considerable clout and museum resources toward the unraveling of a ghost story.

I’d have to be more than subtle, I thought, my pace slowing and mind beginning to settle and stop rocking, like a canoe making an eddy after exiting a white-foamed rapid. I tucked my hands into the pockets of my suit jacket (there’s a chance I’d been gesticulating wildly to myself as I thought-walked, one of my best and most off-putting habits), and waited for the car backing out of the nearest driveway to pull into the street. The window rolled down and a white-haired gentleman appraised me with a raised eyebrow.

“How’s Kipling?” He asked, face wrinkling as he smiled. You had to smile when you thought about Kipling; anyone who knows her does. “You sure she doesn’t need a date with my Rolly?”

“Damn shame,” he said, shaking his head. He said this every time. “A damn shame. Alright, then, you be careful walking home.”

He raised a hand, waited for me to skirt the back of his car and be on my way, and pulled out onto the dark street.

I was pondering on my research plan—just how I’d get it all done—as I took a left into the driveway of 353 Church. I tight-rope-walked one of the long concrete pavers down the drive like a kid, because it’s fun and because being silly sometimes calms my brain. I wondered, would it be possible to enlist help? Research of this strange magnitude always went well with help.

Harry. He sat at the top of my stoop, Kipling at his side with her front paws draped over the wooden edge. He was scratching her ears and she was loving it, the traitor.

“Hey, Harry.” I stopped in front of them, crossing my arms. A defense move, to be sure. I waited.

Heyward Hunt Sims was a catch, according to all reliable Charleston sources, past and present. I should know better than most: I’d caught him. We were together—dating and married—a total of four years, eleven months and seventeen days. Then I’d let him go. It had been like releasing an Alaskan salmon to the wild during the salmon run. I knew he’d get scooped up by a brown bear pretty quick.

He waited for me to speak, loving on Kipling like it was nothing, like it came so easy to him. It was. And it did. I should know: I’d had those hands on me before. They were wonderful liars, just like Harry.