Weekly Lines: “A Freeing and a Clutch”

These new lines from the very first, very rough draft of my historical novel-in-progress are told from the point of view of Gamble, my modern protagonist. For more info on what I’m writing, check out my Work in Progress page, and earlier posts. 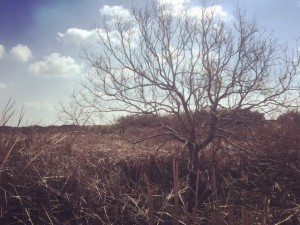 Any time I’d ever driven away from Charleston I felt an odd combination of euphoria and longing, in a place I suppose most would call the gut. It didn’t matter if I was cresting the new, cable-stayed Arthur J. Ravenel Bridge, high over the Cooper River, or waiting on the drawbridge at pretty Wappoo Creek on my way south towards Savannah—or even if I simply took multi-laned, concrete-encased Interstate 26 and headed west: I felt it, each and every time. It was both a freeing and a clutch. It was as if I’d been released into the world, yet at the same time, pulled ever backwards.

Now that I’d been in the past—now that I knew for sure I’d lived at least one lifetime there—the feeling made more sense. History had always seemed to me, as an art historian and general restorer of old stuff, ever present. I never could shake the impression time was always doing its loop-de-loops in the air around us when we walked through the present, like one of those stunt pilots in a Red Baron biplane at a Depression-era air show. I just couldn’t understand why no one else could see the contrails. I felt like a tomboy in dungarees, eyes glued to the sky, while everyone else looked down at their phones.

But there was more to it than that. This was Charleston. And Charleston was complicated. The city was over 300 years-old: it had lived much more than a little. Charleston had seen canoes and U-Boats, hosted princes and pirates, been bloodied and bruised, shamefaced and proud. It told, ever and always, an unflinching American story. No wonder it captivated—no wonder it was so difficult to leave behind.

The city’s history was heavy. You can’t be home to the New World’s largest slave port and think it’s all going to be sunshine and mint juleps, all charm and manners. Every place you set your foot in this city has been touched by human bondage. Black, white and brown, freed and enslaved lives have intertwined here since the beginning. For a visitor, especially, it gives a simple walk through a private, lush, gorgeously-fragrant Charleston courtyard a heaviness they might have otherwise missed, to know the softening bricks you trod were trod not so long ago by people without freedom.

So maybe it’s the past which clings to me as I leave this city, or maybe it’s slavery. Maybe it’s the fact there is ancestral memory in my bones: that my past self remembers my present. Perhaps we all feel like this, leaving a place we love. Letting go is never easy.

None of the above, however, explains why I felt like this each time I left Charleston on a temporary trip. After all, I was always coming back. At least then.

When Tolliver and I drove away from Charleston, this time, we took rural SC Hwy 61 toward Aiken. He drove, and I watched out the window as winter marsh and mudflats turned to sod farms, as young pines broke with yellow pasture. The sky outside was pale and thin, the sun burning through it like light through a shroud.

I felt the freeing, and the clutch. And wondered if it would always be thus.

2 Responses to Weekly Lines: “A Freeing and a Clutch”