Weekly Lines: Scene from my novel-in-progress 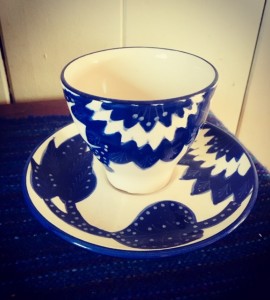 I’ve decided to dedicate a page here, at my author website, to Weekly Lines: scenes I’ve decided to share from my work-in-progress. For more info about the novel itself, click my Work-in-Progress page, here.

Today’s lines involve my 2004 protagonist, the art historian and restoration expert, Gamble, and her best friend, an African-American History scholar named Tolliver. They’re in Aiken, South Carolina, at a venerable old horse farm, taking tea with a pair of old lady cousins who have a mysterious portrait to share. Enjoy!

It was apparent Miss Saralee and Miss Corrine did not often receive visitors. They made us sit through high tea—complete with tiny ham, tuna, and pimento cheese sandwiches; cheese straws and potato salad, dainty Limoges finger bowls painted with cherries (I lifted one discreetly to check the maker’s mark. I am, if nothing else, a historian) and filled with sliced kiwi, strawberries and blueberries; multiple pours of black Indian tea with cream, and at last a silver tray papered with profiteroles, an assortment of chocolate truffles, and, delightfully: Oreos.

“I like double-stuffed,” Miss Corrine said, oval brown eyes widening in delight, before biting in.

I snickered, Tol squeezed my knee under the drape of the tablecloth, and Miss Saralee smiled, black kiwi seeds caught between her front teeth.

“There’s been a change with you two since last time,” Miss Saralee announced, much more than asked.

I thought she’d expound, but she sat like the Sphinx at Giza, and didn’t so much as blink. Tol and I looked at each other. It was his turn to raise an eyebrow. I knew that look. It said, Have at it, babe.

“Oh, leave them be, Saralee,” Miss Corrine said, “Can’t you tell they’re in the first flush? They’re like to get all het up if you pry.”

See: she said it like this, all sweet and helpful-seeming, but there was a distinct twinkle in her eyes. I don’t think she meant a word of it. I think, just like Tol and me, these ladies had a long and permanent connection. They could say one thing and mean another, and no one else would know what they really wanted.

Which is all to say, I think Miss Corrine totally meant: Come on, Saralee, make ’em talk. Get to the juicy stuff.

“They are grown adults, Corrine,” Miss Saralee countered, then swiped a tongue over her teeth. She pressed her lips together and opened them on a pop. “Lord have mercy, Tolliver here is the most fully grown man I’ve ever seen.” She leaned across the table, her shaky elbow bumping a tea cup. I reached to steady it. Big mistake: it made her turn on me.

“And you,” Miss Saralee said, a lionness recognizing the weakest antelope in the herd. “You’re looking rather rosy, rather satisfied. Young lady, you are even more in love than the last time I saw you. I don’t blame you one bit. He’s a catch.”

“Me!” I said, determined not to remain alone in this. “What about him? He loved me last time, too.” Indignant, I rubbed my scapulae against the ornate mahogany backrest of my chair, then crossed my arms. Beside me, Tol vibrated with silent laughter.

I gave the ladies my best stare-down, then turned to my partner in crime. He should’ve looked incongruous, at six-foot-five, in the dainty ornate chair, a full silver tea service set before him. (The ladies requested he pour.) He’d even dressed down a bit for the trip, as he’d been rather limited with the clothes he’d kept at my house: Dark jeans, a round-collared dove grey sweater, and a pair of matte black leather oxfords, scuffed to perfection. His beard had grown thick in the weeks I’d been away, and I was glad he’d not shaved yet. I loved the way the silver threaded through it around his mouth; it made him look like a medieval knight who could also deliver a lecture at Oxford. This was Tol in informal mode—his damn outfit still looked as if it had been made for him. And I was almost positive the sweater was cashmere.

Miss Saralee waved a gnarled hand in the air: a literal pshaw. “Oh, he was, too. Anybody could see it. You just had it written all over your face, dear.”

Well. That’s true. Like I said, I’m no poker player.

Tol folded his napkin and set it to the side of his place setting: an elegant effort at let’s move on. “That was delicious,” he said, as if we’d not just endured ruthless teasing by two wily nonagenarians. “It was so good, in fact, I can’t eat another bite. How about it, ladies: Is it time to see the portrait?”

Miss Saralee narrowed her milky blue eyes, and they almost disappeared in her wrinkles. For a moment I thought the push had been the wrong move. But then she nodded. “Yes, I do believe it’s time.” She looked to Miss Corrine, who gave a regal incline of her head. “I asked Baker to put the portrait in the library, under the lamps, so you could give it a study.”