I Screwed Up Today (or, Parenthood is Not for Sissies)

It is 7:45 a.m., and my children and I are walking into school. My 9 year-old walks two steps ahead, just out of arm’s length and just far enough so that I don’t see the sour expression on her face. My 5 year-old holds my hand, bouncing along so that her light-up shoes light up. She asks me to tell her that story I told her that one time, and peppers me with questions.

At the crosswalk, our SRO greets us with a smile, and a “Good morning, girls.” My 9 year-old, who usually greets him first, cheerily and by name, instead pouts and looks at the ground.

We stop near the doors, and have a brief and heated conversation about respect. To which she responds with an “I know,” and yanks out of my grasp.

It gets worse. Inside, where she usually turns and hugs us both, my 9 year-old walks as fast as she possibly can to get away from us, alone, down the long 4th/5th grade hall. When I call after her, telling her to have a good day, her hunched shoulders and turtle shell of a backpack are the only response.

It was not a good morning. I’d like to blame Daylight Savings Time–which I consider to be an utterly idiotic way to treat the calendar–but the truth is, I screwed up.

Sure, my 9 year-old was acting like a punk. All morning, she’d responded to her little sister in tones better suited to the stock, sarcastic, teenaged character on any television show (the one every parent would like to push, clothed, into a pool). I told her repeatedly to stop. I pulled her away in private, reminded her she did the same things when she was 5, talked to her about how much her sister looks up to her: how it’s one of her jobs to help her little sister, to be patient with her. I told her how I understood her little sister could make her crazy: I, too, am an older sister. 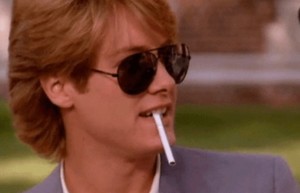 This is Steff, from “Pretty in Pink.” He’s a punk.

None of this worked. My 9 year-old has a big brain and smart mouth, which because of that big brain moves faster than it should. Somehow, somewhere, she has learned to talk back. To be bored and annoyed and too cool. To be what some may call “sassy,” but that’s too cutesy a word for me. Me, I liken this attitude to James Spader’s character, Steff, from “Pretty in Pink.”

Weeks ago, my own sister told me she’d read somewhere that by the 4th grade, our children care more about what their friends’ think than what their parents do. That, by 4th grade, we’re officially no longer the most important people in our children’s lives when it comes to influence: instead, their friends are. When she told me this, I almost threw up.

Of course, I know my husband and I are the most important people in our 9 year-old’s life, and that what we do and say and how we serve as examples mean everything–everything–to the person she becomes. But still: it’s true. Influence is shifting. I can feel it.

I started out okay this morning. The talk in private, the gentle reminders, they were the right things to do. Bully for me. Where I screwed up was later, in the car, when we’d parked at the school and–with a 1980s James Spader scoff and ugly, diffident tone–my 9 year-old broke the last straw. Because then I yelled.

I get it. Everybody yells. It happens. Still, I am the grown-up. Damn it.

Assessing the situation now, I know–just like, truly, I did then–much more is at play here. Daylight Savings Time (may its name be cursed forever), for one. Sensory sensitivities, which my child and I share. Hormones, heaven help me. There is always more than one thing working at once. It’s my job to remember that.

Deep down, though, there’s also something else at play. And that thing is time. For it is moving at heartbreaking speed, pulling my girl away from me–from her sweet littleness–faster than I’m ready. She only has the end of this year and the next until she heads off to middle school.

I’d like to think I’m intellectual and cool enough to think of middle school in better terms: that maybe I’ll even write an essay or a book some day, something insightful, which helps us all look at middle school differently. I know there are teachers out there, especially, who think middle school is just great, and who work every day with love in their hearts for the peculiar breed that is the 12, 13, and 14 year-old. But right now, all I can think of middle school is that it’s the place where my little girl disappears, and Steff emerges.

Here’s also what’s likely to happen: After school today, my 9 year-old will emerge and give me a big hug. She’ll ask to play on the playground. She’ll tell me it was a good day.

9 year-old girls in the early stages of puberty are like highly advanced missile launchers. They fire away with almost-always extreme precision. They are almost always on target. After, they rarely regret a case of friendly fire. They rarely remember the damage they’ve done.

Because of this, I’ll find a moment tonight, in the calm and quiet–See? I’m being optimistic–and I’ll tell her I’m sorry. I’ll talk to her again about being the big sister, and how tone changes everything. Who knows if it’ll work? Parenthood is not, and never has been, for sissies. That’s why, I hope, it’s important to keep talking.

4 Responses to I Screwed Up Today (or, Parenthood is Not for Sissies)