This week I returned from six days in Montpelier, Vermont, at the 2nd Annual Novel Retreat located on the campus of the Vermont College of Fine Arts. I attended the Retreat both as a participant, and as the graduate assistant to Retreat Director Connie May Fowler.

Hours of writing time in a private studio, writing prompt sessions, readings from faculty members and VCFA president and best-selling author Thomas Christopher Green, and fabulous panels/conversations with Connie May Fowler and the two other faculty–Clint McCown and David Anthony Durham–aside, there was this:

At bedtime, I got to close my eyes and not open them until the next morning.

Some of you may engage in this practice nightly, but for those of us with a toddler who’s routinely full-on awake from 2 to 4 a.m. every night, it was AMAZING.

At the Retreat, I worked on my novel-in-progress, tentatively titled THE YEAR OF JOSEPHINE SCOTT. Set in 1860 Charleston, South Carolina and in Massachusetts, in the months leading up to (and perhaps following–I’m still in the early stages) the opening of the Civil War, it’s the story of a young woman awakening to her true self just as her world quite literally catches fire.

In addition to working on this novel-in-progress, I got to commune with some really cool, truly unique other participants–some arriving from places as far-flung as England, Egypt, and China.

I also hiked a bunch in Hubbard Park, Montpelier’s awesome in-town forest. Because it’s a disease. Hiking, that is–for me, at least. A nice disease.

If you’re working in the long form (i.e. working on a novel) or have considered it, the Novel Retreat at VCFA may be the place for you. Plans are already in place for next year’s Retreat.

Some photos from the Retreat: 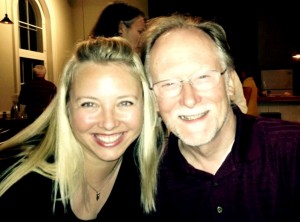 With author-screenwriter-actor Clint McCown on the Retreat’s celebratory last night. 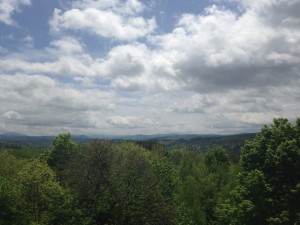 View of the Green Mountains from the lookout tower at the top of Hubbard Park in Montpelier. 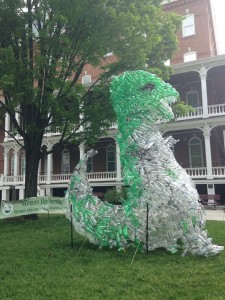 On the State House lawn in Montpelier – Green Vermont 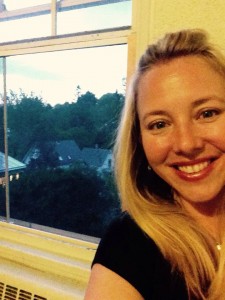 In my dorm room at VCFA. I am SO refreshed! 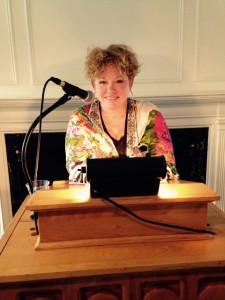 Connie May Fowler, reading from her heartbreaking and gorgeous environmental memoir-in progress. 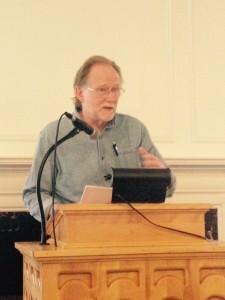 Clint McCown, regarding from something hilarious in-progress.