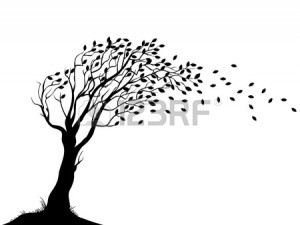 I know I’m three days late, but it’s difficult to believe it’s November. The view out my window has changed dramatically over the past few weeks: the poplar in my front yard has transitioned from green to gold, and now it’s gray-brown branches stretch bare against a sharply blue Fall sky.

I love this time of year, though many folks do not. For me, it’s a regenerating time. Beneath the cold ground, life is shifting, preparing. I like to think that beneath my warm, comfy clothes, my intellectual creativity is regenerating and shifting, too.

So, in honor of November, some quotes:

November comes
And November goes,
With the last red berries
And the first white snows.

With night coming early,
And dawn coming late,
And ice in the bucket
And frost by the gate.

The fires burn
And the kettles sing,
And earth sinks to rest
Until next spring.
~ Elizabeth Coatsworth

“October extinguished itself in a rush of howling winds and driving rain and November arrived, cold as frozen iron, with hard frosts every morning and icy drafts that bit at exposed hands and faces.”
~ J.K. Rowling, Harry Potter and the Order of the Phoenix

“But there is always a November space after the leaves have fallen when she felt it was almost indecent to intrude on the woods…for their glory terrestrial had departed and their glory celestial of spirit and purity and whiteness had not yet come upon them.”
~ L.M. Montgomery, Anne of Windy Poplars