It’s an absolutely gorgeous mid-August day here in the mountains of Western North Carolina: humidity-free blue skies, green, green trees, and everyone out and about and soaking it up while it lasts. So I’m feeling happy, and just wanted to share a few things:

1.) My dear friend, the singer-songwriter Bradley Carter, is also an incredible rock-climber. Here’s the link to an essay he wrote that appeared in the online magazine Live Vertically: it’s called “The Day I Sent a Triple-Link Up in Red Rock,” but when he used to tell the story when we worked at camp together he called it, “that time I sold my body to science.”

Read it here. And if you want to be transported to Red Rock and get inside the life of a philosophical rock climber, you’ll love it. 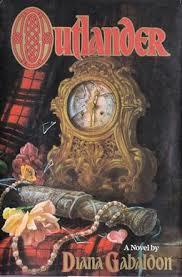 2.) Like so many, I’m a huge fan of Diana Gabaldon’s Outlander series of books. My aunt gave them to me when I was just out of college and bemoaning the fact that I had nothing to read–that I was so bored with everything coming out at the time (this was the early 2000s and I was 22, so what did I know?). The next time she came to town, she plopped these four ginormous, ragged paperback books down on the table in front of me and said, “You will absolutely love this story.” They were the first four novels in the series, and though the covers with their romance-y script and painting of 18th century ships and goblets looked a little sketchy to me at first, I agreed to read them. Immediately, I was transported, entranced, awed. As a burgeoning writer, I was thrilled to see that there was someone doing what I essentially had dreamed of doing: writing novels that repeatedly crossed genres, that delved into history, magic, romance, and more.

All that being said, Gabaldon’s books–20 years after Outlander was published–have finally been made

into a mini-series on the Starz channel. I’ve seen the first episode, and liked it a whole lot. But this article about why men should also get into the series is the best I’ve read about the phenomenon. The author, Anne Helen Petersen, hits the nail on the head.

3.) Some thoughts on actors’ passings:

I was incredibly sad, like so many, to hear of Robin Williams’s passing this week. He was such a huge part of my childhood, playing a role in some of my favorite movies. He made me laugh, he made me think, he made me joy in his effervescent and delightful embodiement of human emotions across the gamut. I hate to learn how he was dealing with obviously crippling depression and addiction, and that it drove him to take his own life. Watching him, especially in interviews, I always wondered that being such a comic genuis–he fairly fizzed with energy–would be a blessing and a burden. My heart breaks for his family. But how lucky we are to have enjoyed his gifts for as long as we did.

One of my favorite Robin Williams quotes: “You’re only given a little spark of madness. You mustn’t lose it.”

Also, Lauren Bacall’s passing has marked another from the Golden Age of Hollywood moving on. She simply embodied cool on the stage and screen. Reading

icon-of-cool-dies-at-89-94579236487.html”>this article about her, I was interested to learn more about her background growing up, about her marriages and personal life. And this got me thinking.

It seems to me that these old-school Hollywood actors, like James Garner (who also recently died) and Bacall, came from very ordinary upbringings and worked incredibly hard to get to where they were. They had, by all accounts, fairly normal, complicated lives. Perhaps their work and the emotion they were able to convey onscreen was so authentic because they’d actually lived–unlike younger actors today, whose parents have moved them to Hollywood since they were toddlers, sent them all the same acting high schools, etc. America’s Golden Age actors also earned their stripes on the stage, much like British actors still do, and are able to reach an entire range those who haven’t can’t. They were more than pretty faces–they embodied the art.