So, here I sit, in my dorm room at the Vermont College of Fine Arts. It’s been a whirlwind of a four days since I left North Carolina, and I know I need to document it as promised. Here we go:

On the first day of my Literary Pilgrimage, I flew into Burlington, Vermont, where my plan was to rent a car and head south to Mount Holyoke College. There, I’d immerse myself in research for my current novel-in-progress, which is set at Mt. Holyoke, partly, the year before the Civil War. But the road trip gods, as they usually do, had other things in mind.

At the Enterprise counter I had a delightful conversation with two young gentlemen who gave me great directions, assorted maps, and set me up with an upgrade: I’d have a sporty Captiva to toodle around in, and I was psyched. I took the keys, assured them I didn’t need help with my luggage, and practically skipped up the escalator to the garage.

Here’s the Capitva. Isn’t she cute? 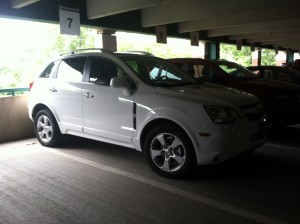 When I got to the car I tossed my bags in the backseat, adjusted the seat to very-short-person settings, and popped one of the CDs I’d wrapped in bubble wrap and brought with me: a little Grace Potter and the Nocturnals. “If I Was from Paris” ripped out of the speakers. Check it out here. See? Mama was rarin’ to go.

Alas, it wasn’t meant to be. There was a light flashing at me from the dash: “Right rear tire low air pressure.”

Bear with me, because this will be important later.

So, I called the young gentlemen at the rental car desk. “Stay put, I’ll be right there,” one of them said cheerily. Minutes later, a van pulls up with a host of early-twenties looking guys inside, playing music loud. My rental car fella climbs out from the backseat, over a friend, and grins at me. “Let’s check this out,” he says.

Here’s the gist: We drove the car to the maintenance shed at the airport, where they filled the tire with air. It had started to drizzle, and I was so ready to hit the road I could barely stand it. I waved goodbye to the rental fella with my window half down, and just as I was backing up he said, “You should be fine. But if you get to Massachusetts and it says you’ve got low pressure again, you should call the nearest Enterprise and trade out your car.” Then he ducked back into the shed as it began to really rain.

I shook off the feeling that something-wasn’t-quite-right, mostly because I was alone and in a car and listening to Grace Potter sing for all she was worth, and it was time to burn rubber. Leaving the airport, I called my husband to debate my route of choice. At the last minute, and with his encouragement (oh, I married a good man), I decided to head towards the coast and to Concord, Massachusetts, three hours away.

It didn’t matter that I’d been awake since 5 a.m., that my flight was delayed in Newark due to mechanical issues with the altimator–you know, the thing that tells the pilots at what altitude they’re flying–and that when I saw the plane would be leaving two hours late, I sat down for a real breakfast only to see on the little computer thingy in front of me that nope, just kidding, my flight was leaving NOW, and I had to sprint for my terminal with my omelet bouncing around in my backpack.

It didn’t matter, because I was headed for Concord, land of the literati of the 19th century and of Orchard House, home of Louisa May Alcott, author of Little Women (among others). I’d been wanting to see Orchard House ever since I fell in love with Jo March, especially when she uttered those very unladylike and un-19th century words I could so identify with: “I rather crave violence.” My only stop: a pull-off in the green hills of Vermont where I took just enough time for a bathroom break and to eat one-third of the cold spinach and goat cheese omelet I’d been schlepping since Newark. Word to the wise: Cold eggs aren’t so yummy. Even with goat cheese.

In Concord, I pulled up to Orchard House with just enough time to scoot in on the last tour of the day. Walking up the gravel path to the house I felt as if in a dream. It looked exactly as I’d always imagined. 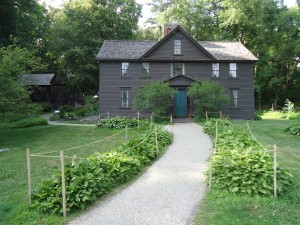 * * Coming soon: the rest of Day 1, my adventures at Mount Holyoke and in Amherst, Massachusetts on Day 2, and more about my last residency (sniff and hoorah–I can do both at once, right?!) in the MFA in Writing Program at the Vermont College of Fine Arts.