I’ve lately been comparing my role in this wild hootenanny we call life to a juggler. It’s not an old analogy: people, especially mothers, are constantly talking about trying to juggle the demands of home and career. Some people make it look easy.

It ain’t easy. And I honestly think it isn’t easy for the perfect people either–perhaps they just look better in public.

These days–to stick with the juggler analogy–I look like a clown in mid-fall, all my juggling balls in the air. So far, I’ve been catching them on the way down. But surely this will not remain the case. Certainly, they will all come crashing down. My goal is not to let them all crash down at the same time. 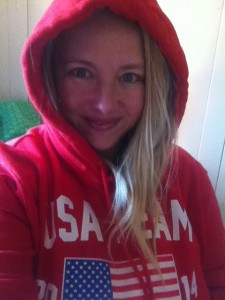 In my brand new Team USA Sochi 2014 sweatshirt. I love a good sweatshirt.

Tonight is the opening ceremonies of the Winter Olympics in Sochi, Russia. I LOVE the Olympics, but I especially love the Winter Olympics. Chalk it up to being a Southerner who’s dreamt of snow most her life, but winter sports have always appealed to me. Some day, I’m going to write a novel about a biathlete. Because imagine the body and brain power it takes to cross country ski your brains out–an exercise involving all the large muscles and quite a bit of adrenaline–and then to stop, focus like a laser and engage the small muscles and the intellect enough to shoot and hit a tiny target. Astounding.

The Olympics, of course, are all about teamwork. From the arenas and their building and upkeep, the food, the travel arrangements, the planning to the athletes from each individual country relying on each other in a myriad of ways we never see as spectators. And then, as the TV commercials remind us, of course, there are the athletes’ families: those people who have been cheering them on since birth, driving them places and providing them with the upkeep of whatever their sport entails, supporting them in innumerable ways and making sacrifices to do so.

All of it: teamwork.

What I have to remember, as I juggle these many-colored balls in the air–husband, daughters, home, grad school, career, writing–is that I never have to go it alone. I am part of a team. My husband is my key team member, and I’m incredibly lucky to have him in my corner. His sacrifices–from handling the girls alone at least twice a week so I can go in early and stay late after my night classes to study and write, to putting up with the inevitable monthly breakdown that comes screaming out of me like a train off its tracks when my graduate packet is due–allow me to do all these things.

Let me stop you here, lest you think feeding, bathing, and getting a 4 year-old and a 9 month-old to bed is an easy job. A job that anyone could do. Well, perhaps so. But it’s a whole different ballgame when you’re playing man on man than when you’re the only one covering. When it’s you alone, it’s like running the gauntlet. Except instead of medieval crazy people coming at you from both sides with swords and rocks and spikes, it’s naked screaming children with honey in their hair and poo poo on their hands.

But back to teamwork.

It’s my job to use my time wisely. If ever a phrase were so over-used … and so daggum true. It’s also my job to finally accept that I may not do all these things well, not all the time.

This entry was posted in Uncategorized. Bookmark the permalink.
Cancel Reply