I hope everyone had a fun, safe and festive Halloween last night! 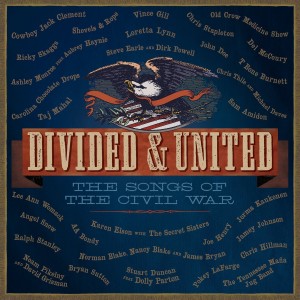 1.) Divided and United: the Songs of the Civil War

On Nov. 5th, ATO records is releasing Divided and United: the Songs of the Civil War, an album of 32 Civil War-era songs (both Confederate and Union) sung by contemporary bluegrass and country artists. I stumbled upon this album over at Garden & Gun magazine. The artists included reads like a list of greats, and up-and-comers: Dolly Parton, Ricky Skaggs, Loretta Lynn, Ralph Stanley, Vince Gill, Steve Earle, the Carolina Chocolate Drops, Lee Ann Womack, T Bone Burnett, Taj Mahal, and more.

Hearing these songs, sung by these artists in particular, makes the music seem fresh–and the longing, joy and sorrow, bravado and bravery that moves through each tune is instantly recognizable. Karen Elson and The Secret Sisters, particularly, sing a haunting version of “Dixie” in a way I’ve never heard before. I plan to purchase the CD, and listen to it while I type away at one of my works-in-progress. (Notice I said “type away.” I’m an optimist.)

It doesn’t matter if you’re a Civil War buff. If you are, you’ll adore this album. But if you aren’t, there’s no way to hear these ballads, sung by these particular people, without being moved. It’s a reminder of how close we came to destroying the dreams of our forefathers and foremothers, to ending in a bonfire of tragedy the great “American experiment.” After all, the Civil War (or the War Between the States, as it’s called where I’m from) was only 153 years ago. And that’s nothing in the grand scheme of time.

To listen to Divided and United in its entirety, click here.

2.) The Southerner’s Handbook: A Guide to Living the Good Life

I swear, Garden & Gun magazine isn’t paying me for the advertising. They’re welcome to, though. Curated by the editors of the magazine, the book’s a compilation of stories, essays, and instructions on how to get the most out of all aspects of Southern life: sport, drink, food, literature, home and garden, music, art and more. I’ve not read it, but I’ve become a fan of G&G despite the fact that from their ad pages I can tell some of their readers exist in a financial stratosphere I’ll never see. Mainly, I read it because of the stellar writing, and so I’m adding the book it to my Christmas wish list.

This article over at HuffPost Books reveals 10 of the funniest Southern expressions I’ve ever heard, and growing up in South Carolina and now living in the mountains of North Carolina, I’ve heard a lot. Most I’ve actually used. It’s a quick, enjoyable read. I dare you– especially those of you from above the Mason Dixon line, to use one in conversation today. Just for the heck of it. And I want to hear about what happens!

No, this has nothing to do with the South, but I love me some quotations. And since it’s the 1st day of November, for your reading pleasure:

“The Pilgrims made seven times more graves than huts.  No Americans have been more impoverished than these who, nevertheless, set aside a day of thanksgiving.:  ~ H.U. Westermayer

Some hae meat and canna eat, -
And some wad eat that want it;
But we hae meat, and we can eat,
Sae let the Lord be thankit.
~ Robert Burns

“October extinguished itself in a rush of howling winds and driving rain and November arrived, cold as frozen iron, with hard frosts every morning and icy drafts that bit at exposed hands and faces.”
~ J.K. Rowling, from Harry Potter and the Order of the Phoenix

“But there is always a November space after the leaves have fallen when she felt it was almost indecent to intrude on the woods … for their glory terrestrial had departed and their glory celestial of spirit and purity and whiteness had not yet come upon them.”
~ L.M. Montgomery, from Anne of Windy Poplars

Over the river and through the wood
to grandfather’s house we go;
the horse knows the way
to carry the sleigh
through the white and drifted snow
~ Lydia Maria Child, Thanksgiving Day, 1845

“If the only prayer you said in your whole life was, ‘thank you,’ that would suffice.”
~ Meister Eckhart