It finally feels like Fall here in Western North Carolina. We woke up to 38 degrees this morning, which isn’t so unusual at all this time of year in the mountains, but hadn’t happened yet. If you’re planning to travel to see the leaves, especially on the Blue Ridge Parkway, this is definitely the time to do it.

Last week I posted about getting ready to head to the Cataloochee Valley of North Carolina to see the elk. Well, we went, we saw, and we had an incredible time. There were six of us: two of my best friends, one with her 2 year-old son, and me and my girls (ages 4 years-old and 5 1/2 months). We met in Waynesville, NC, which is about midway between all our towns and the Cataloochee Valley, regrouped, and caravanned into the Great Smoky Mountains National Park. We’d waited for two weeks for the government to reopen so we could go, so we were psyched to be there among the gold, red, and orange trees, the other visitors, and of course the elk.

People stop their cars, hop out to take pictures, and get much closer to the wildlife than they should. This year there were signs near the road warning cars to stay out of the fields. You’d be surprised–or maybe you wouldn’t–at what some folks will do around wildlife.

Cough. Including us. We unfurled our picnic blankets in the middle of a meadow where a turn of the century (the 20th century) church sat, pulled out our PBJs, yogurts, Goldfish and hot chocolate (can you tell we were with kids?), and thoroughly enjoyed ourselves. My 4 year-old and my friend’s 2 year-old ran around squealing like little happy banshees. (Yes, I know banshees are NOT happy. But that’s what they sounded like.)

During all this, my friends and I–all of whom have been outdoor educators and worked in the field–kept wondering aloud if it was really smart to picnic in the middle of the meadow during rutting season. But then we shrugged, since we’d done it before. About that time an enormous young male elk wandered across the creek from another meadow near by and walked right past our blankets. We gathered the kiddos close and stayed still. A park ranger with a big ol’ stun gun slung over his shoulder wandered our way and chatted with us while we watched it walk by.

Yep, we were THOSE people. We felt like idiots. But boy was it fun to see the elk up close! 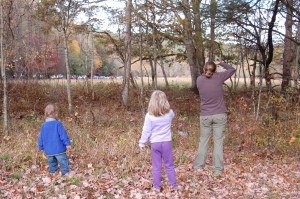 The ranger told us that though the elk are doing fairly well, they’ve had a few die lately due to various causes, including being hit by a car, caught and tangled in underbrush, and shot by idiots. I mean people. One man apparently drove into the Cataloochee Valley, walked right up and shot one of the elk.

Eventually, of course, there’s hope that the elk will do so well that there’ll be a hunting season for them, especially since their ancient natural predators–mainly wolves and panthers–no longer roam the Southern Appalachians. But that’s a long time coming.

At the end of the evening, when the sun had set below the ridges and the clouded sky grew dark, we loaded up our cars and headed out of the Valley. One friend (sans kids) decided to camp. The other and I had to get our children home to bed. It was a 10-mile drive down a pitch dirt road to reach highway again. We all agreed we’d do it again in a heartbeat. 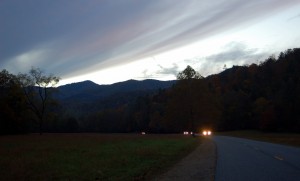