50th Anniversary of “I Have a Dream” 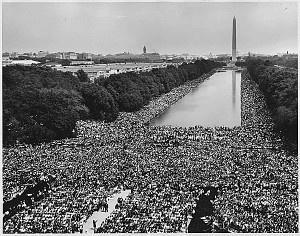 Have you read or listened to the entire thing? Or, have you done so since elementary school?

Or, were there? Were you struck, in August of 1963, by the passion and truth, the singing clarity–heaven-sent, I believe–of King’s now immortal words? Words that hold so much meaning, still today.

Though he was speaking of racial equality when he said, “I have a dream that one day this nation will rise up and live out the true meaning of its creed. We hold these truths to be self-evident that all men are created equal,” I think he meant more.

Though he was talking about the desperate, and segregated present-day, and the need to have faith in a changeable future when he said, “With this faith we will be able to transform the jangling discords of our nation into a beautiful symphony of brotherhood,” I believe he meant even more. 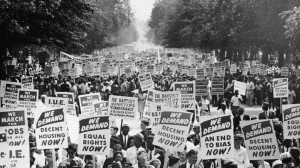 I believe in my heart of hearts that Dr. King knew we’d still need those words today, when so many of us in the United States still yearn for equality for so many different reasons. When our religions and our politics seem to divide us more than ever, when we are told that there are so few choices about how to live our lives. That it’s one way or another.

King was human: flawed and gifted, nuanced and great. It made his passion all the more powerful because of these things.

Great men and women in history, those blessed by God and by the Truth with the words others feel but can’t say, seem to be, always, surprising prophets. And while the quest for racial equality has come so very far and though we’re not quite there yet, King’s words still ring true today, 50 years later. But isn’t it amazing how–more than anything else–they are about coming together as a country, as a people, as Americans, as the human race? HIs most searing images are of children holding hands.

If you’re a writer, you know that this speech sings. But it does so all the more because of the content. Truly, you may think you’ve heard this speech, think you know what it’s about. I’d just suggest we all consider it again.