* Part II of my Artist-in-Residency recap will come early next week!

Actually, it feels amazing. Does this mean we’ll finally get snow again this winter after two years without it?

On this fine chilly August morning, I have some good stuff to share! 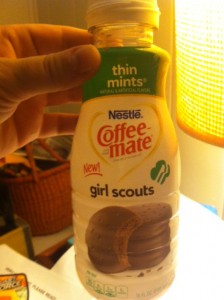 Oh, buddy. This stuff is delicious. I’m drinking it now. It really does taste like a big dollop of liquid thin mint in your coffee. And since we all know that Thin Mints are THE best Girl Scout cookie, you can imagine how good it is.

Yes, it’s probably not the healthiest thing to put in your coffee. But life is short. You could do as I do–rabidly health-conscious woman that I am (oops, sorry, laughed too hard and choked on my Thin Mints coffee) and save it for the weekends.

Aaron Sorkin, the creator of The Newsroom and of my other favorite TV show of all time, The West Wing, is one of 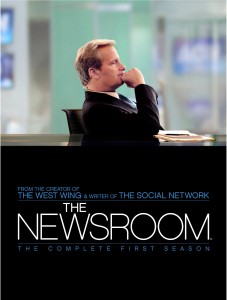 my favorite living writers. The West Wing aired its final season years ago, but my husband and I, when faced with the mediocrity of average television, watch all seven seasons all over again. We do this just about every year or two. So when The Newsroom was announced we decided to order HBO to see what it was all about.

In the beginning, I wasn’t a fan. I appreciated the language, the dialogue, the drama (I’m a nut for politics and world news and journalism), but I couldn’t get into the characters. They seemed stilted, over-the-top. And yes, some critics would say that “over the top” is par for the course for Sorkin. But as we’ve continued to watch, I’ve come to like it more–mainly because of Jeff Daniels and his portrayal of Will McAvoy, who’s a big-time news anchor for a big-time news network. He makes it fun.

If you get a chance to see this show, I think it’s worth it. It’s no West Wing. But if you’re a writer, especially, listen quick to the dialogue. It’s easy to miss the brilliant asides. But when you catch them, they sing.

Most of you don’t know this about me, but I’m a haircut chicken. I’ve had the same hairstyle since the 8th grade, when my one and only perm finally grew completely out and the mocking laughter stopped. Long, straight hair, no bangs. It’s been my go-to for, well, a long time.

I tend to only have my hair cut once per year, and twice over the last 9 years I’ve chopped quite a bit and donated it to various charities. It’s a big deal for a haircut chicken like me. 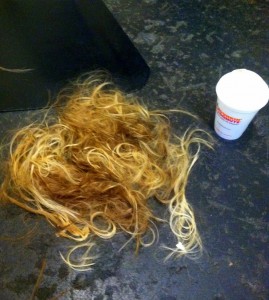 7 inches of my hair. The coffee cup’s there for perspective.

Yesterday, I had 7 inches cut off my hair. The very cute and sweet girl in the 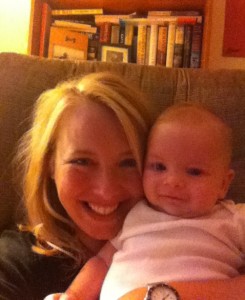 salon who my regular stylist–and it’s really important that I use the word stylist since I’m so stylish … why are you laughing?–recommended did a great job. I had stalked my regular stylist (quit laughing!) while she was on vacation in Mexico, and she made the appointment for me. I, the haircut chicken (bwok bwok) really do like it. I don’t necessarily feel like a new woman. It’s hard to feel that way when you’ve still got a second-child post-pregnancy body and are tired much of the time. But it does feel freeing and light. I feel refreshed.

And it’ll grow out.

I couldn’t have done it without my amazing parents, one of whom took the 4 year-old to swim at the neighborhood pool while the other took care of an unusually fussy infant, who watched my girls for two whole hours so I could get it done. Yes, I still drive to my hometown to get my hair done. It only happens once a year, after all. No, I am not 70 years old.

My advice: if you need a pick-me-up, go get a haircut. It helps. Seriously.

4.) A few quotes from my “Wild Words from Wild Women” tear-off calendar.

The new haircut has me feeling feisty. And check it out: the “newest” of these was written in the 1800s, and they’re still absolutely relevant. Ah, the cyclical nature of history.

“I enjoy vast delight in the folly of mankind; and, God be praised, that is an inexhaustible source of entertainment.”
~ Lady Mary Wortley Montagu, letter writer of the 1700s (and so much more)

“One wants to be something very great, very heroic; or if not that, then at least very stylish and very fashionable. It is this everlasting mediocrity that bores me.”
~ Harriet Beecher Stowe, abolitionist author (Uncle Tom’s Cabin)

“I was admonished to adopt feminine clothes; I refused, and still refuse. As for other avocations of women, there are plenty of other women to perform them.”
~ Joan of Arc, medieval martyr

Have a great weekend, everyone!