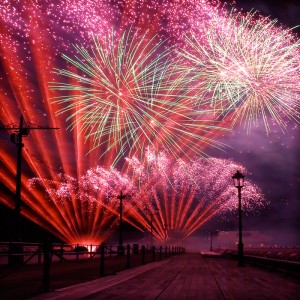 Happy Pre-4th of July, all!

The 4th of July, or Independence Day, is my second-favorite holiday of the year. I’ve loved the 4th since I was a kid, mostly because of what we did: headed up into the foothills to my family’s lake house, spending the week swimming, waterskiing, tubing, grilling out, hiking, camping, shooting fireworks, playing cards, building bonfires, and basically getting into trouble.

There was the year it rained the entire week, breaking all kinds of rain records. The water rose over the dock, and caused wood scorpions to emerge from beneath. We swam anyway. This was the same year our parents gave in and took us to the movies in the closest real town. One of the Batman movies was playing. The theatre flooded.

Then, there was the year we sunk our neighbor’s paddleboat. Not too much of a big deal, except the neighbors hadn’t given us permission to take it and the lake’s over 60 feet deep not too far out from our dock.

What about the year my father and friends told us a ghost story so gruesome (we were in elementary school), that some of the boys cried for days. Days. Hint: it involved a bloody tree trunk, a dead teenager named Fred, and an ax.

There were trips to the hospital (not so fun) broken-down boats, sliding rocks, midnight skinny dipping rendezvous in the middle of the lake, lightning storms, and more. One year, my friend Charley and I double-skied in the driving rain, slaloming behind my Dad’s boat. Our dads were the only people in it, wearing towels wrapped around their heads like turbans.

Now, as a grown-up, I still love the 4th for those many memories, and the new ones I make at the lake with family and friends. But as a history buff–and now historical novelist–I love it for what the day means, and has meant for my country and for me as an American.

If I’m not careful, I could wax poetic about the founding of our country and all the incredibly gifted, inspired, flawed and fantastic men and women who made it possible. But I won’t. Perhaps that subject’s for a future essay, because–from all those months researching the time period of Keowee Valley, especially–I certainly have thoughts about our Founding, and where we’ve come as a country since. What I do know is that no matter how we fuss and fight among ourselves and our own political factions, we remain the world’s most incredible experiment in self-government. And this 4th of July, we’ll only be 237 years old.

So keep an eye on us. We’re still growing.

John Adams, the second president of the very young United States, is one of my favorite American presidents and probably my favorite Founding Father. It also helps that his wife, Abigail, has got to be the coolest Founding Mother. And, we (the American people) happen to have more personal correspondence between the two of them than any of the other Founders. There’s no substitute for reading personal correspondence when studying history. You get it straight from the horse’s mouth.

Anyway, two Adams-based works you’ve got to check out this summer: 1) John Adams, the biography by the venerable (and Pulitzer Prize and Medal of Honor winner) David McCullough. Here, Adams comes to life–and so does his time–with stunning clarity. McCullough tells a story, and it’s wonderful. A must for anyone interested in learning about the reality of our country’s founding (and not just what the talking heads on TV and radio tend to spout). The book was a NYT bestseller and won the Pulitzer Prize. And, 2) John Adams, the HBO miniseries, developed from the book. It stars Paul Giamatti as Adams, the incomparable Laura Linney as Abigail, Paul Dillane as Thomas Jefferson and Tom Wilkinson as Benjamin Franklin. It won dozens upon dozens of awards, including Emmys, Golden Globes and SAG Awards for Giamatti and Linney as John and Abigail.

I own the miniseries (thanks, sister!), and I try to watch it around this time of year. For me, it’s like watching It’s a Wonderful Life at Christmas.

2.) If you’re into the more militaristic aspects of that fateful year of Independence, you’ve got to check out David

McCullough’s 1776. More than John Adams, which concentrates mostly on Adams himself and how he came to be the man he was alongside our burgeoning country, 1776 centers on that year, on General Washington, on battles and troop movements, and the political and sometimes cultural realities. It’s utterly fascinating. It was a national bestseller, and won another Pulitzer Prize.

Moving on from McCullough …

Ever visited the Blue Ridge Mountains of Upstate South Carolina, and gorgeous Table Rock State Park? Well, here’s your chance–and the opportunity to make a literary side trip, too. On Sunday, August 11 from 2 – 5 p.m., the Birchwood Center for Arts and Folklife will be hosting a Book and Author Fair at the Lodge at Table Rock State Park. There’ll be a chance to meet and talk with authors, hear readings from their books/novels, to buy books and to get your books signed. I’ll be there signing and talking about Keowee Valley, which is set in the surrounding areas! Other authors will include George Singleton, Dori Sanders, Susan Tekulve, Dot Jackson and more.

4.) Last, some quotes about Independence Day, democracy, and more, just to get you in the spirit:

“Our political institutions work remarkably well. They are designed to clang against each other. The noise is democracy at work.” ~ Michael Novak

“He that would make his own liberty secure, must guard even his enemy from opposition; for if he violates this duty he establishes a precedent that will reach himself.”  ~ Thomas Paine

“There is nothing wrong with America that cannot be cured by what is right with America.”  ~ William J. Clinton

“You have to love a nation that celebrates its independence every July 4, not with a parade of guns, tanks, and soldiers who file by the White House in a show of strength and muscle, but with family picnics where kids throw Frisbees, the potato salad gets iffy, and the flies die from happiness.  You may think you have overeaten, but it is patriotism.”  ~ Erma Bombeck

“Freedom is nothing but a chance to be better.”  ~ Albert Camus

Have a wonderful 4th of July, everyone. Let freedom ring!