Today is the Summer Solstice: the longest day of the year, the official first day of summer, and, as it so happens, my husband’s birthday!

Oh, how I love the summer. Sunday was the first night I’d noticed the lightning bugs. I’m sure they’d been around already, but we’ve got an infant in the house, and so some things have lately gone unnoticed. We tried to get our 3 year-old to catch them with us, attempted to explain just how cool these little glowing creatures are, that they mean summer and freedom and magic–but she just wasn’t into it. Oh, my broken heart. But she’ll get it one day.

1.) Native Eyewear is sponsoring a contest called the “Locals Only Project,” where viewers can vote for the best outdoor town. Native Eyewear will travel to that town and make it the centerpiece of their next catalog. My town, Brevard, NC, is up this year! And we are truly lucky and blessed to live where we do: in the Blue Ridge Mountains, at the foot of Pisgah National Forest, with the best mountain biking track and hiking trails East of the Mississippi.

Check us out and vote here. 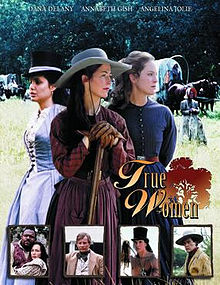 2.) Last night I pulled a movie from our DVD library that I haven’t watched in a long time. Called True Women, it was a CBS miniseries in the ’90s starring Angelina Jolie, Dana Delany, and Annabeth Gish, and based on the novel by Janice Woods Windle. I’d picked the DVD up in some pile of “for sale” stuff a while back. Set over five decades, starting in 1830s Georgia and Texas, against the backdrop of the Indian Removal (Trail of Tears), the Alamo and Texas independence, the wars with the Comanches, and eventually the Civil War and women’s suffrage, it’s full of capital-D Drama.

Parts of it are overly-sentimental–mostly the over-the-top Southern accents, which only Gish really gets right–but it’s a rousing adventure and a story of three very independent Southern women in a wild and dangerous time. The relationships between Delany’s and Gish’s character (they play sisters), and between Delany and her character’s husband (played by veteran Western actor Powers Boothe) is lovely and real.

Check it out: an escapist adventure for a few hot summer nights! (And I bet you could get it for free from your local library.)

3.) Speaking of libraries–very cool places to be in the summer–here’s the list of the latest books I’ve checked out. (All novels.) They’re sitting on my bedside table and the side table where I feed my baby. I’m optimistic I’ll make it through all of them in time to check out more for July, especially considering the wee hours and I have grown quite friendly:

I’ve got to admit: I’m a chronic re-reader. I just finished re-reading Shadow of Night by Deborah Harkness, and Monsters of Templeton by Lauren Groff. And, I recently gulped down Susanna Kearsley’s newest, The Firebird, as soon as Amazon.com delivered it to my door earlier this week. More on that soon!

4.) In my CD player: (And, yes, I still have a CD player) I’m currently listening to new albums by two camp buddies of mine (read: friends I worked with for years at a camp in the NC mountains): Bradley Carter’s The Real Job (CD jacket designed by another camp buddy and talented artist, A.J. Power) and Shannon Whitworth’s High Tide.

Quite a bit of talent comes out of the NC mountains. Check them all out when you have a chance. And I’ll write more later about all these books and this great music, here and at my blog. No guarantees on when (she types as the infant cries from the bassinet), but it’ll come!

Happy Summer Solstice to everyone!