Well, folks, I am 38 weeks pregnant. I am an ocean liner. A 90 year-old with permanently creaky hips and questionable navigation.

I am cranky, I am exhausted, and all I want to eat is ice cream. Right now, the only person in my house who does not annoy me is the dog.

That being said, this is my last post for a while. I’m due to have this baby in 6 days. So if you don’t hear from me for a little while, that’s why. I’ll try to at least get a good baby picture up here to share in a week or two, though.

In the mean time, here are some cool things I wanted to share before I head (God willing) into post natal bliss:

1.) My favorite show currently on television, NCIS, is finishing up its 10th season. That’s quite a long stretch for a TV drama, which means some kudos for the writers who keep viewers coming back week after week. That being said, Tuesday night’s episode ended on a cliffhanger, making me wonder if they’re going to kill off one of my favorite characters, a former Mossad officer-turned NCIS agent, Ziva David.

I can’t take this sort of drama with my pregnancy hormones raging. If they kill off Tony or Ziva–two characters playing ”will they or won’t they?” NCIS agents–I’ll lose it. Anyway, this interview with Cote de Pablo (the actress who plays Ziva) may fill in a few of the blanks. As a writer, I’m especially interested in the way she describes a choice with a certain scene in Tuesday night’s episode, and the way that she thinks Tony’s character is evolving … who he is as a man. Very cool.

Check it out here.

2.) I’ve talked about this book, Dirt Work: An Education in the Woods, here before, but I’ve got to mention it again.

Just published this month by Beacon Press, it’s a book of essays about life as an Alaskan “trail dog,” by my friend, the writer Christine Byl. It’s already come out to great acclaim, and has been mentioned as a “favorite Spring read” in places like O Magazine and more!

I hope you’ll check it out; it’s available in hardback and as an eBook from any independent bookstore, and of course online at places like Amazon.com. 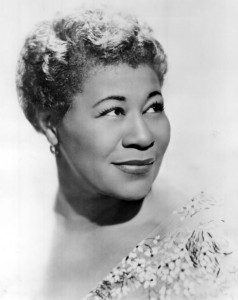 3.) Today is the birthday of Ella Fitzgerald, the ”First Lady of Song.” Originally from Virginia, she entered a talent contest when she was 16, started to freeze up, and then sang. From there, it’s history.

Ella once said, “The only thing better than singing is more singing.” So in honor of Ella, and of my current physical state caused by the baby in my belly, check out “Cry Me a River.”

That’s all, folks! Happy Weekend, and I’ll catch you on the flip side.

4 Responses to Show & Tell Thursday – The See Ya Soon Edition