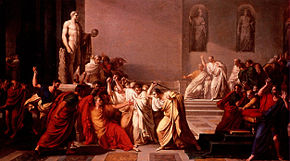 The Death of Caesar by Vincenzo Camuccini

Ah, the infamous ides of March: the first month of the year in the original Roman calendar (the Romans celebrated the New Year from March 1st until today), the day in 44 B.C. when Julius Caesar was assassinated by members of the Senate (thank goodness our senators are a bit more well-behaved … though some would argue, not by much), and the feast day of the year’s particular goddess.

Mostly, though, we know of the “Ides” because of Shakespeare’s bloody and fascinating play Julius Caesar. (What, you’ve not read it since high school–or at all? Get thee to a library!) He gives us an up close and personal view of the B.C. formula for taking down a dictator.

And people think a study of history is worthless. Pshaw.

On to today’s edition of “Show & Tell Friday.” Last week, I gave you a new book, a poem, and some great music. Today I’ve got some good stuff to share, too: 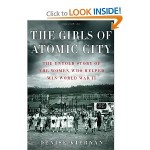 1) The Girls of Atomic City: the Untold Story of the Girls Who Helped Win WWII by Denise Kiernan

My grandmother was one of those “girls,” so this book holds special meaning for me and my family–especially my mother and her three sisters. My Grandmama Jean moved to Oak Ridge, Tennessee, just out of college, recruited to work there in the war effort. As a family, we’ve returned many times to “the Secret City” where my mom and aunts were raised, and where my grandparents met–he a scientist on the Manhattan Project (the atomic bomb). My sister and I bought this book for my mom as an early Mother’s Day present. I hope she reads fast, so I can get it next.

2) Have you heard yet about the “Harlem Shake,” a YouTube dance craze sweeping pretty much the world lately? Sure, it’s becoming a bit passe, but still a whole lot of fun to watch. Check out the students at Clemson University doing their version HERE.

3) Hundreds of road bikers will descend on our little mountain town of Brevard, N.C. April 12-13th for the 14th Annual Assault on the Carolinas. Races include 100k, 60k, and 40k routes, the 100k race stretching down the Blue Ridge Escarpment into S.C. and back up the notorious Caesar’s Head State Park. Several events occur during the weekend, including access to locally-brewed beers and live music. There’ll also be a lack of parking space and lots of fit people wandering around town in very tight pants.

Brevard has become a mecca for road and mountain bikers alike; many of my friends and neighbors have become honestly obsessed with the sport, going on long rides every weekend and even weekdays. They are most definitely, as my buddy and neighbor Adria says, “All eat up with biking.”

4) And finally, some quotes for your Friday. Because I can’t resist quotes. I papered the walls of my college dorm room with quotes. (Apologies to Lisa, my roommate who put up with them.)

In addition to holding the Ides of March, the month of March is also home to Women’s History Month and Albert Einstein’s birthday. So, in honor of both these lauded events, some sayings:

“The way I see it, if you want the rainbow, you gotta put up with the rain.” ~ Dolly Parton

“Please know that I am aware of the hazards. I want to do it because I want to do it. Women must try to do things as men have tried. When the fail, their failure must be but a challenge to others.”~ Amelia Earhart

“I’d much rather be a woman than a man. Women can cry, they can wear cute clothes, and they’re first to be rescued off sinking ships.” ~ Gilda Radner

And these from Albert Einstein …

“Two things are infinite: the universe and human stupidity; and I’m not sure about the universe.”

“Everybody is a genius.  But if you judge a fish by its ability to climb a tree, it will live its whole life believing that it is stupid.”

“Science without religion is lame, religion without science is blind.”