So, I’m boldly entering my 3rd semester as a graduate student in the MFA in Writing program at the Vermont College of Fine Arts. I say “boldly” because I’m due to have Baby 2 one month before the semester officially ends. Maybe the phrase should be “nuts.”

Thankfully, the kind folks at VCFA, and my new advisor for the semester, have agreed to work with me. It means an accelerated work plan, and so I’m taking the semester off from teaching to try to make it all happen. And then Baby 2 will come. And my little world will spontaneously combust.

This semester is a bit different from the others: it’s the critical semester, which means along with producing new work (in my case, work on the new novel and hopefully-maybe an essay), I must complete a long, formal paper called a Critical Thesis. I’m okay with long academic papers–when I earned my MA in English I ended up finishing with two 75+ page theses–but it’s the time crunch that I think’ll get me this time.

Or, as Butch tells Sundance, “Are you crazy? The fall’ll probably kill ya.” 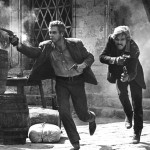 My critical paper topic is going to focus generally on the role of place/setting in historical fiction. While my reading list isn’t quite as intensive as earlier semesters (I’m also using works I’ve already read to aid in thesis research), I still thought I’d share. And maybe throw in a few pleasure-books as an added bonus. Here we go:

1. Waverly; Or, ‘Tis Sixty Years Since by Sir Walter Scott

Published in 1814, Waverly is Scott’s epic account of the Jacobite uprising of 1745 (also known as “the ’45″), based mainly on all the stories he’d grown up hearing from his Scottish grandparents. He wrote it anonymously, even though by then he was already a famous writer. Apparently, popular novels were pooh-poohed in the “real” literary community. (Hm… sounds familiar.) Here’s what Jane Austen had to say about it, “Walter Scott has no business to write novels, especially good ones … I do not like him, and do not mean to like Waverly if I can help it–but I fear I must.”

Winner of the Pulitzer Prize, Ironweed is the story of Francis Phelan, an “ex-big-leaguer, part-time gravedigger, full-time bum with the gift of gab,” who’s returned to his hometown.

3. The Last of the Mohicans or The Pathfinder by James Fenimore Cooper

These are two of the novels in Cooper’s famous The Leatherstocking Tales, chronicling the adventures of the frontiersman Natty Bumpo. I read The Last of the Mohicans when I was far too young to be reading it, and so I say it’s time for a second go-round. 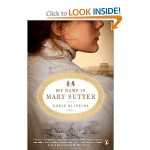 4. My Name is Mary Sutter by Robin Oliveira

My Name is Mary Sutter won the prestigious 2011 Michael Shaara Award for Excellence in Civil War fiction. Cool fact: Oliveira is a 2006 graduate of the MFA in Writing program at the Vermont College of Fine Arts.

5. Walk Through Darkness by David Durham

Suggested by my advisor, who’s a friend of Durham’s, Walk Through Darkness is the story of William, an antebellum slave on the hunt for his pregnant wife. It sounds like nothing I’ve read before, which makes me happy.

And now, on to books I’ve read before but will be re-examining for my critical thesis this semester: 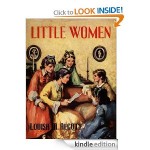 6. Little Women by Louisa May Alcott

No explanation needed. I love this novel; have since I was a little girl. And as the protagonist of my work-in-progress is sort of a Southern “Jo March,” I’m heading back to the source.

7. The Last Report on the Miracles of Little No Horse by Louise Erdrich

Though I’d read quite a bit of Erdrich, I read The Last Report… for the first time last semester, and fell crashing into love. The story of a woman posing as a male priest on the Ojibwe reservation of Little No Horse, and of the adventures, foibles, and tragedies of her flock, it’s a novel that will stay with you long after you put it down.

8. The English Patient by Michael Ondaatje

Another work I read only last semester, The English Patient is a stunning, epic of a novel rooted in WWII history and drama. Ondaatje’s gorgeous, laser-like focus on each of his central characters, and of the settings they inhabit–an Italian Villa, North Afria–is utterly masterful. (On a side note, if you weren’t a fan of the movie, forget it. Read the book!)

Next, on my bedside table for pleasure-reading. I know, it seems nonsensical to be reading anything other than books for my grad program, especially since it’s not like I have a lot of free time, but I can’t help it. It’s my disease.

9. The Invisible Ones by Stef Penney

Penney is a Scottish screenwriter, and I loved her debut, The Tenderness of Wolves. In fact, now that I think about it, I may have to use that book in my thesis, too! 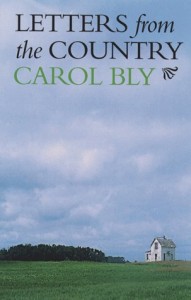 10. Letters from the Country by Carol Bly

A collection of essays about life in the small rural town of Madison, Minnesota, this is one of Bly’s best-loved works. 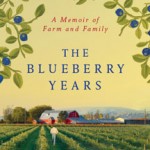 11. The Blueberry Years by Jim Minick

“A Memoir of Farm and Family,” The Blueberry Years was the winner of the 2011 Southern Independent Booksellers Alliance Best Nonfiction Book. It’s the story of a couple and their blueberry farm, and a look at food culture in America as we know it today. 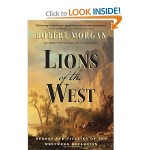 12. Lions of the West by Robert Morgan

Robert Morgan’s Boone was one of the best biographies I’ve ever read, and I used it to aid in my research for Keowee Valley. When Lions of the West was released, I knew I had to have it for my personal library. Thank you, my favorite in-laws, for fufilling a Christmas wish! This book tells the story of westward expansion through 10  Americans full of adventure and land-lust, including Thomas Jefferson, John “Johnny” Appleseed, David Crockett, Sam Houston, and more. It’s also the story of the tragic displacement of Native Americans, and the roots of the Civil War.

If you haven’t noticed, I’m a book-a-holic. My list could go on and on. If I included my research list for Novel 2, you’d groan (and probably throw something at your computer). But there’s not much I like more than sharing books!

Join me on my journey, if you get a hankering.